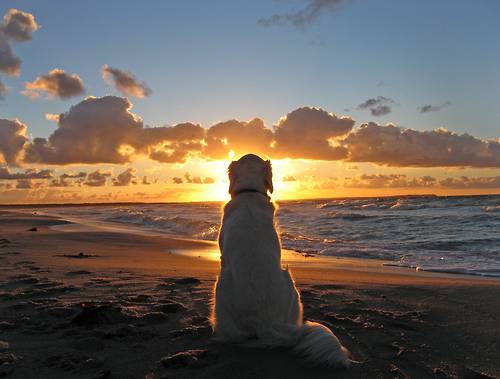 Been lying here under the car since forever, bugs carelessly flying above my drooping ears, a busy community of ticks underneath my thinning fur, my belly warming the road and vice-versa.

Used to race back and forth along this dusty street, chasing cars, bikes, and strange people with unfamiliar scents. I never got tired even when my tongue was flapping out my snout, leaving a trail of drool in the rushing wind. Life was a never-ending chase then and I was the four-legged speedster behind it, unrelenting, hungry. I never got tired and realized I was spent until now…

Now I just lie here like a log long broken down by poison mushrooms. I watch the road, the cars, the bikes, and the people but the fire in my gut has been extinguished. They’re all begging to be chased screaming from one corner to another but my legs just won’t move like they used to. And so I watch them overrun this street–my street soaked in my sour pee–and I watch them helplessly.

These days, I am a pretty useless “pet”–if you can still call me that. Can’t even protect my home no more should a man with an evil intent climbs over the wall one of these humid nights. If I’m lucky enough to spot his shadow with my bloodshot eyes almost shut by sticky green grit, then I might let out a bark though my owners shouldn’t really count on it since I lost the demon in my voice years ago when a nasty piece of chicken bone got stuck in my throat. Sure, I’ll force myself to run after him and try my best to bite his leg but don’t count on it. Nobody should ever count on it anymore.

Look at these people with the smirk on their faces–how I long to wipe it off with a good growl. Men are arrogant–they think they know life because they live longer than us. A wise, old dog once told me that men live seven of our lifetime, and that makes them proud beings. What fools. If one has seven lifetimes, then that means it takes them seven times longer to commit life’s mistakes and to learn from those mistakes–seven bouts of the same pain from the same wound, which would never close even when it was licked to heal years ago. And from such an unimaginably protracted existence, you may be seven times the wiser but you’re also seven times the fool.

How many lifetimes does it take to learn what to eat? What to put in your snout and be part of your body? Do you really need such a lengthy life to know that your nose tells the truth? The food that nurtures smells good even if may not always look nice, and what’s rotten smells bad even if it’s often a feast for the eyes. The nose doesn’t lie–for it’s an extension of your heart.

How many lifetimes does it take to learn to establish your territory, to pee on the right wheels and scratch at the right trees? Surely once is enough? The independence and insolence of youth might drive you once or twice to cross the invisible boundaries that cut this space of earth but you learn from your first teeth-and-claw fight to respect others, to stay away from the sacred shrines they diligently guard.

You don’t need seven lifetimes to realize that the greatest kind of loyalty comes from humility–that there are things bigger than you and you owe your life to them. You bow your head in service to their greatness and transcendence, and when you’ve learned to bow your head low enough, you become great, too, for you have transcended yourself.

It is often said that freedom is overrated but it is more often misinterpreted. Gnash your fangs and howl all you want at cages and collars but nothing teaches the essence of true freedom as bitingly as limits.

And then there’s love–that primeval force that sends you scrambling desperately out the gates at night when all the unwanted eyes are closed or looking somewhere else dark. The unbearable heat of it, the madness that comes rushing through your veins! You can never rest and crawl in a comfortable corner until you’ve smelled her lovely scent and felt her warmest secrets. But you’ll never learn her secrets no matter how deeply you fall–and that perhaps is the greatest limit of all. For no matter how fast you run, love still runs faster–an unchasable car. And because your paws and claws can never even scratch it, you keep running like a rabid canine–irrational, insane, untamed, wild, honest.

Another kid throws a ball at me. I don’t even flinch. I’m tired and lazy like a young cat. The world now has to forgive me for every little thing I can’t do for I’ve paid my dues, barked my blues, and done them all before. People have this saying that old dogs can’t learn new tricks. They’re wrong. We can learn new tricks anytime–but old dogs don’t play no games. Not anymore.